“Engineering the Olympics” – EEESTA’s thirteenth annual prestige seminar – took place on the evening of Wednesday 9th November 2011, at the University of Hertfordshire. There were 320 delegates, including over fifty students from six schools and two Universities in the region. 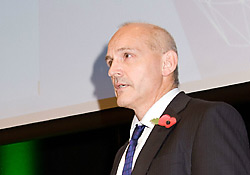 After an informal networking buffet, the seminar was opened by our host for the evening, Professor Quintin McKellar, Vice Chancellor of the University of Hertfordshire. He then handed over to the Chairman, John Armitt CBE, Chairman of the Olympic Delivery Authority (ODA). A Fellow of the Royal Academy and the Institution of Civil Engineers, Mr Armitt was previously Chief Executive of Network Rail, and was awarded a CBE in 1996 for his contribution to the rail industry. He has extensive experience on major construction projects in the UK and overseas.

Before the main business of the evening the Chairman had two pleasant tasks to fulfill for EEESTA: he presented the EEESTA Innovation Award, and acknowledge three Friends of EEESTA. 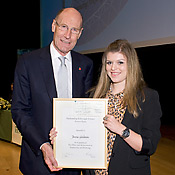 The EEESTA Innovation Award was inaugurated in 2008 to celebrate the 10th annual Prestige Seminar at the University of Hertfordshire. This year it went to Jemma Goldstein of Haberdashers’ Aske’s School for Girls an outstanding Arkwright Scholar. The Arkwright Trust is a charity which aims to promote engineering to young people and now has several hundred scholars each year across the whole country. Jemma aspires to read Physics at Manchester and has strong interests in space and astronomy. This year she has attended Senior Space School UK at Leicester, obtained a Nuffield Bursary at the Centre for Astrophysics Research at this University, and attended the Physics Academy at Queen Mary College London. After receiving the Award, Jemma gave a very confident “Thank You” speech. 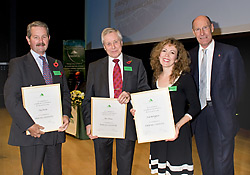 EEESTA owes a deep debt of gratitude to a few individuals who have helped in their various ways to make these seminars a success over these last 12 years. This evening three people were made Friends of EEESTA. The Chairman presented the following people with a framed certificate to thank them for their involvement:

The Chairman then set the scene for the evening and introduced the first speaker.

The first speaker, Jerome Frost MA MRTPI, Head of Design & Regeneration for the ODA, led the team that devised the development strategy and the longer term regeneration proposals. He was responsible for the Design, Master planning and Engineering Contracts for the Olympic Park and is now a Director of Arup.

In his talk entitled “Designing the Olympic Park” he described how a 246 hectare polluted post-industrial wasteland had to be converted into a site suitable for the construction of the Olympic facilities. Consideration had to be given to overall design, town planning and sustainability, to ensure that the programme delivers a lasting legacy.

The second speaker, Simon Wright, was appointed ODA Director of Infrastructure and Utilities in 2006. He was previously Director of Arup Project Management Europe at Ove Arup & Partners Ltd. Mr Wright has over 30 years experience in managing complex, large-scale infrastructure projects including Battersea Power Station redevelopment and the Greenwich Peninsular regeneration.

In his talk entitled “London 2012 – Olympic Park: Delivery of a Time Critical Major Programme” he explained that traversed by overhead high voltage cables, rivers, railways and roads, the development of the area posed many challenges. One of the greatest was managing the logistics of a very large dynamically changing construction site. Materials from demolition and ground remedial activities have been recycled and kept on site where possible.

The third speaker, Lord Mawson OBE, sits on the Board of the Olympic Park Legacy Company and is one of Britain’s leading social entrepreneurs, best known for his pioneering work at the Bromley by Bow Centre, East London – the UK’s first Healthy Living Centre. For this work he received an OBE in 2000. He was made a life peer in 2007. In his talk he first described two regeneration projects he had instigated, where their success was due to the local people, he proposed those models as the means to ensure a lasting legacy for the Olympic Park.

The seminar ended with a chaired question and answer session which provided further interesting insights from all the speakers. The Chairman then summed up, mentioning the topic for the 2012 Seminar, “The Herschel Space Observatory”.

The Vote of Thanks was given by Roy F Hill BA MBA, European Managing Director of CH2M HILL.

He has over 27 years in business development and project management for complex investment projects worldwide. Major European Current projects include the London Tideway Tunnel for Thames Water and the management of the London 2012 Olympics Infrastructure implementation.

CH2M HILL was the principal sponsor of this EEESTA Seminar. 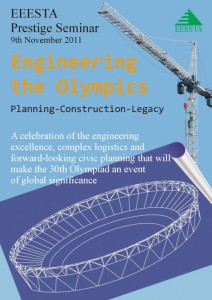 Lord Mawson referred to slides provided by the other speakers