Audience in the Weston Auditorium

The 2012 EEESTA Seminar “Discovering the Hidden Universe” – EEESTA’s fourteenth annual prestige seminar – took place on the evening of Wednesday 14th November 2012, at the University of Hertfordshire. The Seminar was an outstanding success. The venue was fully booked days before the event, indicating the immense popularity of astronomy. Despite some no-shows there were over 400 delegates, including many students from schools and two Universities in the region.

University of Hertfordshire provided a splendid finger buffet in the Atrium for all the delegates to enjoy. The newly refurbished Atrium adjacent to the Weston Auditorium was warmer than in previous years, and that made networking with other delegates much more enjoyable.

The Seminar was opened by Professor John Senior, Pro Vice-Chancellor (Research), University of Hertfordshire who gave a short welcome address which included a brief description of some of the important astrophysics research being carried out in University of Hertfordshire. He was deputizing for Professor Quintin McKellar, Vice Chancellor of the University, who had been called to a meeting with a Government Minister.

Professor Senior then handed over to the Chairman, Professor Michael Rowan-Robinson, Past President, RAS. He was Head of Astrophysics at Imperial College from 1993-2007. In 2008 he was the first recipient of the Institute of Physics’ Hoyle Medal, for his pioneering research in infrared and submillimetre astronomy, and observational cosmology. Asteroid 4599 has been renamed “Rowan” to honour him. He is working in cosmology and infrared astronomy.

Before the main business of the evening the Chairman had two pleasant tasks to fulfil for EEESTA: he presented the EEESTA Innovation Award, and acknowledge two Friends of EEESTA.

The EEESTA Innovation Award was inaugurated in 2008 to celebrate the 10th annual Prestige Seminar at the University of Hertfordshire. This year it went to Oscar Gill of Redborne Upper School and Community College, Ampthill, an outstanding Arkwright Scholar from the region. The Arkwright Trust is a charity which aims to promote engineering to young people and now has several hundred scholars each year across the whole country. Oscar has has been involved with the Headstart course program and won many of the challenges presented by the course, and has also been working on several projects at home, including research into artificial intelligence and robotics. Oscar aspires to read Engineering at Cambridge, and to be a chartered engineer and a talented inventor, which has been his dream ever since he was young.

EEESTA owes a deep debt of gratitude to a few individuals who have helped in their various ways to make these seminars a success over these last 14 years. This evening two people were made Friends of EEESTA. The Chairman welcomed John and Carol Christopher as Friends of EEESTA, but was only able to present the Certificate to John Christopher as Carol was ill. John has served EEESTA for most of its existence: he has been Chairman of the Seminar Committee, and Chairman of the parent body, and has worked tirelessly to help EEESTA achieve its objectives. Through all these years Carol has supported him in his endeavours and run much of the basic support for the actual event by filling delegate folders and manning the front desk outside.

Professor Rowan-Robinson set the scene for the Seminar with a historical overview of infrared astronomy, starting with the detection of infrared radiation from the sun by Herschel in 1800 and continuing with a brief history of far-infrared astronomy from space. In particular, by focusing on the science drivers, he described how the early missions of the 1980s and 1990s led to the Herschel project. He then moved to the future, telling us what we can expect post-Herschel.

The second speaker, Professor Matt Griffin, Deputy Head of School of Physics & Astronomy, Cardiff University was involved in building an instrument for ESA’s Infrared Space Observatory, and went on to become the Principal Investigator for the UK-led SPIRE instrument. In 2011 he was awarded the Royal Astronomical Society Jackson-Gwilt Medal for his outstandingly successful work on SPIRE. He is also a Co-Investigator of the Planck Surveyor satellite, which is studying the big bang.

Professor Griffin described the UK-led design, development and delivery of the highly successful SPIRE instrument on-board Herschel. He described the design and construction of SPIRE and the Herschel satellite, including a three videos, one showing the launch of Herschel and the other two showing its launch and deployment. His talk gave a flavour of the spectacular science results obtained with this instrument over the last 2 years.

The third speaker was Professor Mike Barlow, Head of the Astrophysics Group, Department of Physics and Astronomy, University College London. His involvement with space-based infrared astronomy goes back to ESA’s Infrared Space Observatory and has continued through his membership of the Science Team for SPIRE. His current research focuses on dust production by supernovae, and studies of ionized nebulae and blue compact galaxies.

Professor Barlow described the fascinating results of the Herschel Space Observatory on highly evolved stars and their nebulae, and its discovery of large amounts of newly synthesised cold dust particles ejected from recent supernovae, such as the Crab Nebula the Cassiopeia A remnant and Supernova 1987A in the Large Magellanic Cloud.

The seminar ended with a lively question and answer session which provided further interesting insights from all the speakers. The Chairman asked the audience what should be done with the Herschel satellite at the end of its life: the majority decision was that it should be crashed into the Moon. The Chairman then summed up, mentioning the topic for the 2013 Seminar, “Deep-Ocean Science, Technology and Conservation”.

The Vote of Thanks was given by Des Prouse, Leader at Goonhilly New Ventures. He worked for BT for 41 years, 35 in the development of satellite communications systems and earth station design technology, based at Goonhilly Satellite Earth Station in Cornwall. His Vote of Thanks included a brief, interesting description of Goonhilly New Ventures, a voluntary action group comprising various parties interested in forging a sustainable future for the former Satellite Earth Station at Goonhilly Downs, Cornwall, including astronomical research.

EEESTA broke new ground by streaming the seminar live to the Internet, thanks to the technology and generosity of Missing Link Live and Global Teleports, and SES, who provided the space segment. 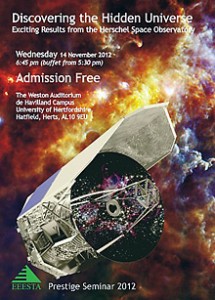 Results from the Herschel Space Observatory