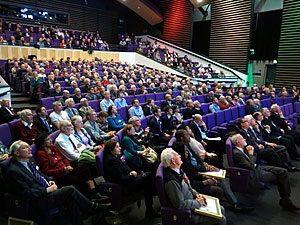 “Crossrail”, EMSTA’s eighteenth annual prestige seminar, took place on the evening of Wednesday 9th November 2016, in the Weston Auditorium of the University of Hertfordshire. The event was fully booked, but on the day there were a number of no-shows: however the Seminar was a great success – some feedback suggests it was the best yet.

The University provided a selection of tasty sandwiches in the Atrium for the delegates to enjoy whilst networking with other delegates: the sandwiches disappeared all too quickly.

The Seminar was opened by Professor John Senior, Pro-Vice Chancellor (Research), University of Hertfordshire, who gave a short welcome address and then handed over to the Chairman, Gordon Masterton, Government’s Project Representative on Crossrail from 2009 to 2014.

The Chairman welcomed both Bernard Dawkins and Dr Andrew Powell, OBE, as Friends of EMSTA. Further information about both recipients is given on the Friends of EMSTA webpage.

Crossrail is the largest infrastructure project in Europe. Its trains will be over 200 metres long and run from Reading, Maidenhead and Heathrow in the west to Canary Wharf, Woolwich, Abbey Wood and Shenfield in the east. They will run in 21 km of new twin bore tunnels under the centre of London. When Crossrail opens it will increase London’s rail transport capacity by 10%.

The Chairman set the scene for the Seminar, in good humour, by noting that he had been Government’s Project Representative on Crossrail from 2009 to 2014, and the project was fine when he left it. He was looking forward to hearing that it was still fine.

The first speaker, Chris Binns , talked about Infrastructure, station fit-out and railway systems. His presentation was the larger part of the seminar, lasting about an hour. He started by describing the many positive impacts Crossrail will have on residential and commercial property values, supporting new homes and over 3M m2 commercial office floor space. It has also had a positive impact on skills development and job creation. He showed many pictures showing the tunneling and station buildings, some of which have been designed with a specific theme related to their position and surroundings in London. His talk also included two fascinating videos, one showing the laying, fixing and concreting of the track, and one showing the drilling of supports in the tunnel walls for power supplies, cables and other services. Both videos featured the use of specialist trains of wheeled vehicles.

Joe Bednall then talked about Crossrail rolling stock, first describing how Bombardier, having lost the Thameslink contract invested heavily in the new AVENTRA train platform development with 150 engineers. Their challenge for Crossrail was to develop from that an iconic new train, giving not only a good passenger and driver environment, but low cost to manufacture, operate and maintain. His talk described the production challenge, where flow-line manufacturing was used.

Both talks referred to the three different signaling systems that had to be installed in various sections of Crossrail, because of legacy Network Rail systems on Great Eastern, and Western Region, and a brand new system in the Crossrail tunnels: the trains have to handover from one system to the next on-the-move.

The seminar ended with a question and answer session, superbly orchestrated by the Chairman, which provided further interesting insights from both speakers.

The Vote of Thanks was given by Peter Hansford, Former Government Chief Construction Adviser.

This was the fifth year that EMSTA has streamed the seminar live to the Internet, thanks to the technology and generosity of Missing Link Live and Global Teleports, and SES, who provided the space segment. Technical problems marred the webcast for a short period at the start of the Seminar, but before the talks: a video recording will be made available.

Photographs on this page by Neil Drake. Text by Ian Williamson. 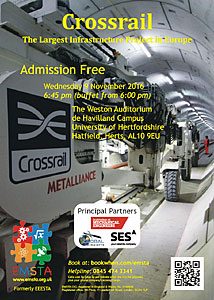 For those who prefer not to use the embedded media players.